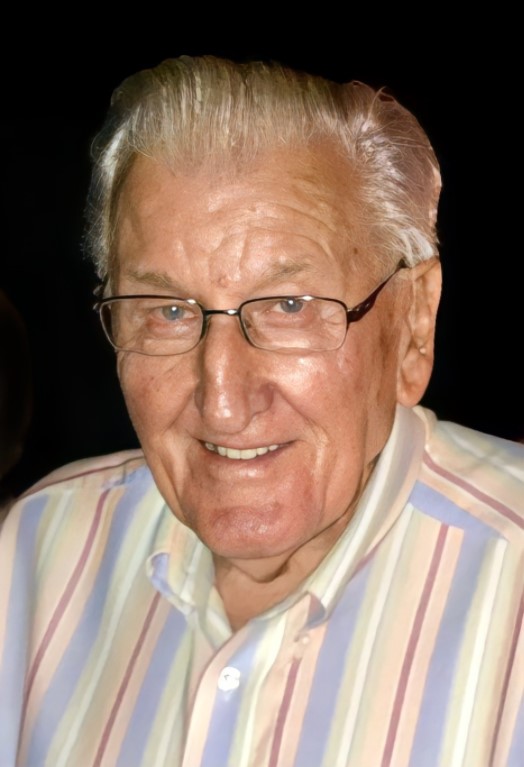 Otto F. Wrabl, a retired metalsmith, lithographer, and executive, died Tuesday, July 19, 2022, in hospice at Luther Manor, Dubuque, from complications of pneumonia. The 17-year resident of the Galena Territory was 86 years of age. Mr. Wrabl, who emigrated to this country in 1952 and subsequently became a naturalized citizen, was born in Marburg-an-der-Drau (Maribor), Austria, to parents Franz and Juliana (Vertic) Wrabl in 1936. He was raised as an ethnic German. His childhood years were marked by the chaos of World War II, including seven years in a displaced person’s refugee camp. Soon after arriving in Gary, IN, Mr. Wrabl decided to settle in the Chicago suburbs. He took an entry-level position at Fuze-On Corporation in Mount Prospect, IL, and rose through the ranks to become vice-president. He was proud at the time of being able to afford, and acquire, one of the first (candy-red) Mustang sports cars. True to his roots, Mr. Wrabl organized a successful skiing club and was a member of the cultural organization Schwaben-Verein, where he played soccer and performed a traditional folk dance. Through these activities, he began dating Carol Gidel, a nurse. Otto and Carol fell in love and were married in 1962, eventually raising two sons in a new house in Buffalo Grove, IL, where they lived until 1985. Prior to his 2005 Galena retirement, Mr. Wrabl lived in Marshfield, WI, and Joplin, MO, where he worked as a freelance metalsmith and supervisor for several companies. He was also a co-inventor on a 1977 patent for an innovative metal surface-coating method and started his own firm in the Chicago suburbs. An avid fisherman and golfer, Mr. Wrabl greatly enjoyed skiing, family gatherings, German folk dancing, and ballroom dancing. His family remembers him as a fun-loving, practical gentleman who was always present when needed, with strong feelings for his favorite sports teams, including the Chicago Bears and Premier Soccer League. He and Carol were fortunate to have the opportunity to travel extensively, including trips to Peru, Egypt, and China. In a 2017 milestone trip, he returned to Slovenia with his family to visit the house where he was born. He loved his dogs Daisy and Pumpkin, who were loyal to the last. Mr. Wrabl was a member of the First Presbyterian Church of Galena. Cremation rites have been accorded, and a memorial service with burial will be held at Casper Creek Natural Cemetery. In addition to his wife of 60 years, he is survived by his two sons, James (Julia), of Baltimore, MD, and Karl of Fairbanks, AK, one grandson Alex, and a sister, Edith Timmerman of Portage, IN, and one brother, Ewald “Butch” (Sue) Wrabl of Hobart, IN. Others left behind to cherish Otto’s memory are niece Linda (Mark) Timmerman Janovetz of Mukwonago, WI, and nephew Bill (Barbara) Timmerman of Portage, IN. Mr. Wrabl was preceded in death by his parents, one brother, and an infant son. In lieu of flowers, the family asks that donations in his memory be made to the Jo Daviess Conservation Foundation, the Safe Haven Humane Society of Jo Daviess County, or the First Presbyterian Church of Galena.