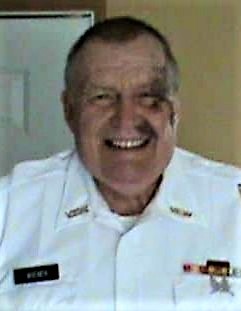 LeRoy J. Wienen, 75, of Pittsburg, MO, and formerly Galena, IL passed away on Saturday, June 26, 2021, at University Hospital, University of Missouri, Columbia, MO, after a short battle with cancer. A special service will take place at Noon on Saturday, July 24, 2021, at St. Michael’s Cemetery, Galena with Father Howard Barch officiating.  Military honors will be accorded graveside by Galena VFW Post #2665 and American Legion Post #193. He was born on July 24, 1945, in Galena, the son of Alfred and Helen (Leifker) Wienen. He served in the United States Marine Corps from 1963 until 1967 where he did two tours in Vietnam. He was a lineman for Illinois Bell in Galena, for many years until his retirement. He later moved to Missouri and would later be the Commander for a local VFW post for several years. LeRoy was an avid fisherman and hunter for most of his life. He enjoyed watching westerns and war movies. He loved spending time at the local Galena VFW or The Gold Room when he had a chance. Surviving are his wife, Carol, of Pittsburg, MO and her daughter Shekainah (Eric) Mischler, of El Paso, TX; two (2) daughters, Carly Caris, of Wilmot, WI, and Teri Wienen, of Milwaukee, WI; two (2) grandchildren, Dominic Caris, of Wilmot, WI, and Amber (Nick) Reuter, of Hazel Green, WI; two (2) great-grandchildren, Nash and Alijah Reuter of Hazel Green, WI; his siblings, Mary (Don Howard) Rumbaugh, of Wheatland, MO, Ron (Judy) Wienen of Leesburg, FL, Patty (Rick) Foley, of Galena, IL; nieces, nephews, great-nieces and great-nephews. He was preceded in death by his parents; his brother, Joe Wienen; his paternal grandparents, Harry and Margaret (Gerlich) Wienen, and his maternal grandparents, John and Helen (Manley) Leifker. The family wishes to thank the doctors and nurses at University Hospital for their care, compassion, and honesty. To celebrate his life the family will be meeting at the VFW in Galena directly following the service.  Those who knew LeRoy are invited to attend the service as well or stop in the VFW.