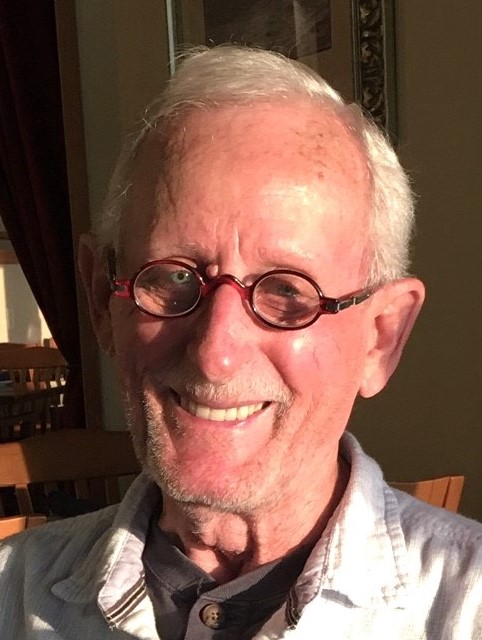 John W. Butts, 92 of Galena, IL died Wednesday, June 10, 2020, at his residence. In accordance with state and federal guidance on gatherings during the COVID-19 pandemic, the family will not be having a public service at this time. The Furlong Funeral Chapel, Galena is assisting the family. He was born May 15, 1928, in Marion, IL the son of Arlie and Pearl (Ward) Butts. John graduated from the University of Indiana with a master’s degree in social work and furthered his education in childcare programs from the Chicago Institute of Psychanalysis. He served in the United States Army as an MP until his honorable discharge. John married Judith Rowett in 1985. He studiously and relentlessly worked to be engaged in reading, learning, and wondering about vast or intimate subjects.  He had a unique insight into complex issues. He loved the back and forth of daily conversation on profound subjects with his wife in their morning routine sitting by the fire.   John believed everyone had an amazing story.  He initiated conversation with people by noticing something about them which inevitably led to compelling human stories. John brought these precious gems home.  He loved the experiences of regular people. His thinking remained profound to his last day.  He spent the last months cooking his favorite recipes while recalling his most cared for people and times of his life. Starting in the ’60s his work as Director of Community Mental Health in Will County, IL led to the development of comprehensive programs. Occupational, individual, social, and recreational therapies, along with work placement and transitional living resources were instrumental in helping many people make a satisfying and meaningful life. His many stories of these people’s courage and struggles always moved his soul.  In recent times, he despaired about the lack of mental health resources that exist for people who suffer without treatment, leaving individuals without a belief in their ability to be well. In 1988, John retired to his beloved Ozark Mountain Farm in Boswell, AR with a population of 16 people.  He pursued cutting down trees from his woods, growing an acre garden, restoring a 125-year-old Cumberland 4 Square House, growing chickens (which he couldn’t kill), and meeting the needs of Dr. Quack, a wayward duck, who resided on One Duck Pond.  He was teased and harassed by his donkey Cleo as he ‘gave what he got’.  He admired Cleo and Buckwheat rounding up and ridding the property of coyotes.  His grandkids came down summers for Piney Creek swimming, chores of all kinds, and riding in the back of the pickup down the bumpy Jumbo Rd. with four dogs.  Eighteen cats kept the vermin away in this wilderness.  This period of his life was the heart of this man. Moving to Galena in 2001 was difficult in leaving the woods, the waterfall, the canyon, and the animals. His dearest friends had died. John and his wife wanted to be nearer family who were reproducing prolifically.  He found a new love in woodwork.  He brought Old Growth Pine boards with him to continue to find the unique character in each plank to best present the beauty of wood in a table or another piece. He delighted in the 19 annual Thanksgiving 3-day celebrations with 4 generations of family who all enjoyed his stories and his company.  He was called Beastmaster by his grandchildren for his masterful grilling of ‘Big Meat’ and his charismatic relationship with animals.  He is terribly missed. He is survived by his wife, Judith of Galena, son, John B. (Jim Abaduddo) Butts of Palm Springs, CA, two daughters, Mary (Mike) Dennis of Winfield, IL and Kathy (Michael) Kullik of St. Paul, MN, four stepchildren, David (Michele) Mason, Peter Mason, Melissa Mason and Laurie (Josh) Latham, ten grandchildren, and nine great-grandchildren. He was preceded in death by his parents and a brother and sister.