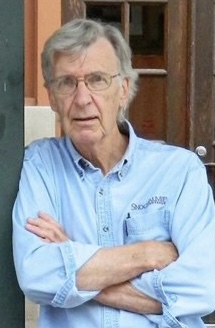 James Calvin Clark passed away peacefully on November 14, 2020, of complications from Parkinson’s Disease. A celebration of his life will be planned when it is safe for friends and family to gather. The family is planning for interment of ashes at Casper Creek Natural Cemetery at Casper Bluff Land and Water Reserve on Pilot Knob Road south of Galena. Cremation rites will be accorded. The Furlong Funeral Chapel, Galena is assisting the family. Jim was born in East St. Louis, IL on August 19, 1939, to Herbert and Berneda (Bowman) Clark. He graduated from Northwestern University in 1961 and in 1970 moved to Galena, IL where he and his first wife raised their daughters Bronwyn and Wendy. In 1987 he and Debra Shull were married in the Gazebo in Grant Park, and they continued to make Galena their home. Jim was a man of intellect who pursued knowledge his entire life; he was a voracious reader and tireless writer. He was an environmentalist before that was fashionable and he worked tirelessly to restore Bald Eagle habitat on the Upper Mississippi flyway. He was also captivated by trains, astronomy, wine and spirits, birds, photography, and live music. He instilled a passion for language in his children and grandchildren, and could be relied on for clever puns, dry wit, and scathing commentary. Many will remember his days managing Benjamin’s downtown and his contributions to the local live music scene in the 1980s. No one was more thrilled when the Chicago Cubs finally won the World Series in 2016. He was always competitive watching Jeopardy over dinner and played a mean hand of Cribbage. In recent years he enjoyed traveling to presidential libraries with his wife, researching his family ancestry and history across the Midwest and Montana, and spending time with his grandchildren, who will miss him greatly. He is survived by his loving wife Debra Clark, daughters Bronwyn (Dale) Clark Skov, Wendy (David Hanna) Clark, stepdaughter Heidi (Peter) Moore, brother Michael (Laurie) Clark, and grandchildren Arthur (Marisol) and Joren Skov, Calvin Maples, and Elise, Kevin, Kieran, Rory, and Owen Moore.  Jim was preceded in death by his parents, and his first wife, Sheila Stoll. In lieu of flowers, gifts in Jim’s memory are suggested to the Jo Daviess Conservation Foundation http://jdcf.org/conservation/how-you-can-help/honorary-memorial-special-gifts/ or to the Galena Foundation fund, P.O. Box 1, Galena, IL 61036 for the restoration of the Gazebo in Grant Park.